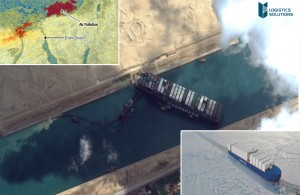 It is already more than a half month that the Suez Canal has been freed from the strained Vessel. However, analysts predict, that the world has yet to cope with the upcoming wave of troubles caused by the one-week blockage. 400m long Container ship Ever Given was tug back on a float on March 29, but it is early to say that the ship is at ease. At the moment It has been arrested by the Suez Canal administration. Egyptian authorities claim from Marine Evergreen - the vessel owner company more than $900mln. According to different sources, Canal's revenues were taking a $14m-$15m loss for each day of the blockage. Besides vessel salvage costs, the Company is requested a payment for loss of reputation.

Considering the importance and scale of everyday usage of the route, the navigation jam triggered huge global issues. In our review, we will try to assess events, initiated after the closure of the Canal.

First and foremost, is the slowdown of global trade and cargo turnover. The domino effect can be already witnessed in various fields of business and price hikes of services and goods. According to experts, the global trade suffered from approximately 6 to 10 Bln USD loss. The Stuck Container ship itself was transporting goods worth 9.2 Bln USD. All of this could lead to a decrease in annual trade growth by 0.2 to 0.4 percentage points. It has already affected the oil price for some timeframe as well. Naturally, the abovementioned can be directly followed by the increase of prices, hindered services and business downturn in Georgia.

Another great issue is the long queue of ships on both entrances of the canal. Several weeks might be necessary to suck it out. By March 29, at the northern entrance of the Canal only, in the Mediterranean Sea, over 350 different types of vessels were waiting to their turn to get the canal. The condition of the goods, especially of that livestock became a hot issue and instant solutions were needed.

The issue of ecology also surfaced on the agenda. Ships held up pushed sulfur dioxide to five times normal levels on the canal’s Mediterranean side. The SO2 spike is thought to be generated from anchored ship’s auxiliary engines burning fuel that provide crews with a power supply. Heavy air pollution is well observed by the European Union’s Sentinel-5P satellite (Breakbulk - Ever Given Finds New Ways to Get Stuck). While Water pollution level in the area is notably increased too.

The Suez Canal incident brought up the question of alternative Asia-Europe shipping lines through Arctic waters. While avoiding the Suez Canal, and abiding African continent, transportation takes 8 to 10 days longer, the North Atlantic route could be the best new option for many European companies. With new generation ice-reinforced hull ships, leading companies already try to establish the line and diminish risks of hitting the snags on a way of global transportation.

Amendment in the regulations of Truck stops and stations
Happy Earth Day
If we humans want to save Nature, we need to improve our Nature - Happy Earth Day!
Suez Canal free, but complications still ahead
It is already more than a half month that the Suez Canal has been freed from the strained Vessel. Ho ...