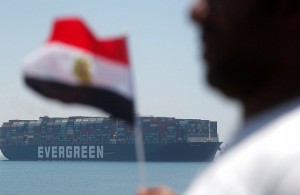 All of us remember Company Evergreen’s containership Ever-Given. Back then, we shared our views and insights regarding the infamous accident, when Ever-Given - a 400m long fully loaded container ship blocked 193km-long Suez Canal. We talked about the possible upcoming domino effect, following global trade disruption by closing the crucially important waterway and delaying the delivery of the Billion-dollar value cargo placed on the ship itself ( https://bit.ly/2VBPRA9).

After a 6-day rescue operation, the jammed ship was dislodged from the banks of the canal (killing one person during the operation). However, the vessel was detained by Egyptian authorities requesting compensation for the salvage operation, damage to the canal's banks, and other losses.

According to BBC News, a few days ago, after almost 100-day detention, Ever-Given was released from the port of Ismailia and resumed its voyage.

The final settlement has not been revealed, but on July 7, the ship weighed anchor and headed north towards the Mediterranean. SCA (Suez Canal Administration) initially asked for 916mln USD compensation, including 300mln USD for a salvage bonus and 300mln USD for loss of reputation. Later SCA lowered its demand, and last week the deal of the ship's release was signed.

It is worth mentioning that, up to date, the official reason for the ship's grounding is unclear. The question, whether the mistake was done by the canal’s representatives due to adverse weather, or the ship’s crew is still unanswered. At a news conference, Osama Rabie-Suez Canal Authority chairman said the ship was the sole responsibility of its actions. Hereby, SCA announced that rules about the passage of ships in bad weather will not be changed. However, the accident had accelerated plans for the canal's expansion.

The vessel with an Indian crew is still loaded with about 18,300 containers. It is due to undergo an inspection by divers before sailing to Rotterdam and then will be docked at the UK port of Felixstowe where it will offload its containers, the Wall Street Journal reported.

BLOG / Kakheti – Region with a huge Logistics Potential
According to the official data, over 70km of new modern motorway have been added to Georgia’s ...
BLOG / Caspian-Black Sea corridor VOL.2
Through the discussion around the Caspian-Black Sea Corridor, we resume our travel into the potentia ...
Container ship Ever-Given’s Saga ends
All of us remember Company Evergreen’s containership Ever-Given. Back then, we shared our view ...