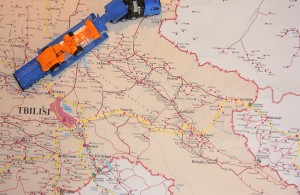 According to the official data, over 70km of new modern motorway have been added to Georgia’s international high-speed road network during the past year. Meaning, that travel time from the capital of Georgia to the Westernmost seaside regions has been minimized, while travel comfort and safety have been significantly increased.

Besides, Let’s do not forget that active construction works are going on in the Rikoti valley. A total of 71 bridges and 47 tunnels are going to be constructed in the frame of the so-called “Century Project”. After the completion of this mega project traffic capacity and cargo turnover of the East-West Road will be boosted even more and the level of the regional, as well as international logistics, will step up into a completely new dimension.

Needless to say, how important road communications are strategically for economic development. Hence, it is essential to link between the different parts of highways and form a central road artery of Georgia.

However, today, talking about Georgia’s central east-west motorway, it is not quite correct to say “East-West” in terms of geography. The existing central expressway (part of the EU E-60 road) begins from the very south of the country. It enters from Azerbaijan and Armenian borders, passes Tbilisi – Capital of Georgia, and then heads to the West. Thus, leaving behind all east areas of the country.

With this in mind, here’s a major question: - what’s going on in Kakheti – in the easternmost region of the Country?!

Today, one of the richest regions of Georgia and the largest region of the country with the biggest potential in agriculture and tourism is lacking proper road infrastructure. Only those roads constructed in the past century exist in the region. They do not respond anymore to modern requirements, cannot comply with today’s standards, and stay way far from the level of development we have in central and west Georgia. For example, In the municipality of Lagodekhi that borders neighbor Azerbaijan and links to each other two countries, cargo trailers and ferries have to drive through narrow and damaged country roads. And all this happens in the region that desperately needs a complex and well-organized logistics and road network for the proper supply of the various touristic centers and the export and realization of rich agriculture products, especially vine and grape.

There are 150kms from Tbilisi to the eastmost point of the country – to the border village of Matsimi. The current situation makes us say that today all this distance is untapped in terms of road infrastructure. Kakheti is knocked out from the comprehensive logistics network that we depict in our blog series. It cannot play any serious role for international transit in such conditions.

Luckily, the situation is supposed to change soon. The first steps taken by the government and the announcement of large-scale projects induce big hopes and a sense of perspective.

According to the latest news, in 5 years, in Kakheti we will witness an expressway equal to the TBILISI-BATUMI highway. The creation of the arterial road in the region has been inputted as one of the main priorities in the 10-year action plan of the Ministry of the Regional Development and Infrastructure – MRDI.

Let us detailly get acquainted with the plans and projects slated by the government!

According to MRDI, a 4-lane interstate road will be constructed in Kakheti. For the first stage, It is planned to develop an 85km long road of Tbilisi-Bakurtsikhe. As the beginning, the bidding for the construction of a 35.2 km Tbilisi-Sagarejo section has been announced. As a continuation of the abovementioned highway, the development of a 40km long distance from Bakurtsikhe to Lagodekhi is in its full swing as well. For that, another bidding for the first 16.6 km section way has been announced (Bakurtsikhe-Tsnori), where 6 bridges are to be built. This distance is the main part of the road that goes to the east border and passes densely populated areas, making it difficult for cargo trailers to drive. The new bypass will be constructed on the field-banks of river Alazani and will avoid towns and cities. Thus, the intensity and traffic capacity will be boosted, as well as the safety and security of the travel. these ongoing projects will be accomplished in 2 years and will resolve many of the challenges existing today. The overall price of the whole project comprises 2bln GEL, funded by the local budget and the international organizations.

After 5 years, an international artery road of the Tbilisi-Bakurtsikhe-Lagodekhi-Azerbaijan border will be stretched across. It will be linked to an existing E-60-expressways somewhere near Tbilisi and whole Georgia will be connected in terms of transport-transit. That will be the moment when we can proudly state that Georgia is indeed crossed by the Central East-West freeway from one end to another.

Therefore, a cargo ferry entering from Caspian/Central-Asia or heading to this direction will stay longer on Georgian roads and pass much time on our territory than before, bringing more profit to the state and its citizens.

On the other hand, we should not forget about secondary but nonetheless important roads, that link between major population centers and administrative capitals. For instance, last month a 15.5 km long bypass road of Gurjaani was inaugurated. It is an important route to reach Telavi -The capital of Kakheti. New road outflanks 6 towns and villages. If before more than 30 minutes were needed to pass through them, now the max time to cover this distance is only 10 minutes.

At the beginning of August, another important road has been reconstructed. A 15km long Sagarejo-Udabno-David Gareji motorway has been completely refurbished.

Generally, reflecting on the road-infrastructure development, we should not think about future perspectives and international trade only. The profit gained during the construction works is also meaningful. To specify, according to official data, in 2020 total of 31,000 people and 1,300 companies were involved in 6,000 road projects. 70-80% of the staff were Georgian citizens. They enjoyed not only financial revenue, but the opportunity for professional growth. Therefore, the all-embracing Kakheti development is absolutely vital for the very locals as well.