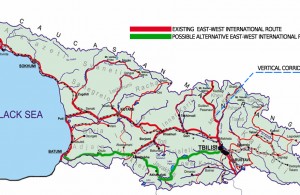 After the summer holidays, we are back to our faithful readers with series of blogs about logistics and Georgia’s place in Global Logistics.

In our blogs, we analyze and discuss the possibilities that Georgia’s strategic geo-location could bring to the state and each of our citizens in case of the right policy for the development of logistics.

To date, we already talked about regional highways, international routes and crossroads. We also discussed South-North and East-West corridors, reviewed different widescale infrastructural projects ongoing in different regions, and last but not least, we brainstormed on Georgia as a country with huge potential of becoming not only regional but Eurasian logistics hub.

In today’s blog, we would like to introduce you to another crucial route. By its essence, it represents sort of an alternative but equally strategic choice for East-West inland communication. We believe that its development should be one of the priorities, alongside other national projects.

In our previous blogs: “Caspian-black Sea corridor” and “Caspian-Black Sea corridor VOL.2”  we overviewed the international importance of the existing central East-West expressway. We saw impressive data and the income the state enjoys from transit. However, a country that has a global ambition of international Logistics must diversify its routes and offer alternative directions as well.

An urgent need for the alternative route popped up several times during the recent history of our country. For instance, during one of the unenviable events, the central East-West highway was blocked and all trade-economic turnover has been delayed or redirected through our neighboring countries, causing the near economic collapse of Georgia.

The route that we introduce today, is located in the southern part of Georgia in the Region of Samtskhe-Javakheti and has all characteristics to become a full-fledged part of the Caspian-Black Sea Corridor. It is Tbilisi-tsalka-Ninotsminda-Akhaltsikhe-Adigeni-Batumi direction. This is the road that has played and will play a pivotal substitutional role in case of any improvident event helping the country to maintain trade connections. However, for that, a huge influx of investment must be done and mega infrastructural projects must be carried out to make the road compatible with modern standards and in case of necessity support the amount of traffic flow that we have today on the existing East-West route.

According to official information, only Akhaltsikhe-Ninotsminda part of the whole southern route is classified today as an international road, in the list of Georgia’s international road-connections (source) and it is referred only to Armenia. But it is worth mentioning that this part of the road connects to the road coming from Tbilisi->Manglisi->Tsalka and heading afterward towards the Goderdzi Pass, linking directly Batumi, i.e., ports or border with Turkey.

You might question this plan, considering the difficult geographical conditions in the region, and actually, you will be right, since there are Goderdzi Pass and mountainous Shuakhevi of Upper Adjaria, on the way. However, let’s do not forget that the existing central East-West highway also crosses many Passes and valleys thanks to tunnels and modern highways. Besides, the South-North direction (named by us as Vertical Corridor) crosses the toughest Jvari Pass. These examples clearly show us, that despite mountainous geography, routes are active and demanding.

Hereby, the plan for the development of an alternative route is quite feasible and crucial. Especially when seasonal tourism in the Upper-Adjaria region is booming and winter tourism infrastructure is under development there.

The evolvement of the alternative route at the south will ease the transit of goods through Akhkerp, Gugut and Ninotsminda border points. Trailers entering or exiting using these points would reach the western part of the country much easier and in less time. Cargo trailers incoming from Azerbaijan would also benefit a lot from the south route. In many cases, they would avoid the circle-like passage around Tbilisi and would directly head to the west.

As for southern regions, emerging of the international expressway through them would bring huge benefits as to Samtskhe-Javakheti so to Upper-Adjaria, where additional transit infrastructure would be created and with it income source for locals.