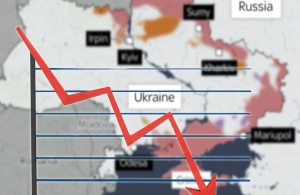 The world's attention during the last month and a half is entirely captured by the war in Ukraine. Due to Russia’s brutal aggression, a war is raging there. A full-fledged conflict on the European continent naturally influences not only its territory but lots of other sectors globally.

International transportation and logistics are no exception. It faced a drastic change, especially after comprehensive and severe sanctions on Russia by the international community.

In the article below, we will briefly and generally overview those figures that have been detected in logistics and particularly in sea freight.

As the recent information from the international transportation journal – ITJ states, according to calculations made by the Kiel Institute for the world economy, the global exchange of goods is set to fall by 5,6% compared to the previous month. This represents the biggest drop since the outbreak of covid-19 in spring 2020. EU export dropped by around 2.8%. Germany alone 3.8%. USA – 3.6%. Cis (Excluded Russia) the export of this particular group as a whole dropped by 4%.

As was expected, Ukraine has been largely disconnected from almost all international logistics activities due to heavy fighting on its territory. Only military-humanitarian aid is being transported mainly by road and rail from territories of Poland and the Baltic states.

According to another international magazine Heavy Lift and Project Forward International – HLPFI, Maritime risk, security, and intelligence agency Dryad global advised all commercial operators to avoid any transit or operation within the exclusive economic zone of Ukraine in the Black Sea. Therefore, today almost all Ukrainian ports ceased operation.

As a consequence of international sanctions, Russia has been hit hardest with an 11.8% drop in export in February, compared to the previous month. And naturally, the decline will continue for the months to follow. Russian transport and logistics companies are suffering badly from the after-effects of the Russian Invasion of Ukraine. Airlines grounded and major infrastructure projects have been halted. The aviation sector was one of the first to be hit by the western sanctions. Moscow Sheremetyevo airport has closed its terminals D and E, and temporarily shut down runways 3 responsible for cargo turnover according to ITJ.

The war has a bad effect on diesel prices, which respectively caused a surge in price in the transportation sector. Besides, many tanker companies that were for the greater part specializing in transporting Russian gas to the western hemisphere also faced a harsh crisis. Today, most of the countries in the world refuse to acquire Russian oil and gas and the demand for such kind of transportation have fallen drastically. The activities of main European gas refinery factories have been almost halted as well. According to international experts, by the course of the prolongation of the Ukrainian Crisis, the abovementioned problems will deepen even more.