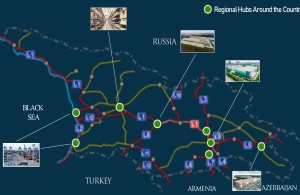 The listed motorways are those arterial roads that pass over Georgian territory and cross each other in several cross points. We thoroughly overviewed each of them in our previous blogs.

Furthermore, our country enjoys vast seaside with two major ports situated on it to date. The discussion on the realization of another port project is under active discussion too.

The central geographical position in the region, free trade agreement and various bilateral agreements on economic cooperation with bordering nations, makes Georgia an ideal country for the neighbourhood to conduct its economic and export-import activities transiting through Georgia.

As a proof, let us look at the volume of the re-export of different goods, that flows through Georgia. It is clear that due to a certain economic policy and relatively low prices, neighbouring countries prefer to acquire a product in Georgia and then transport it to their country, rather than export the good directly from the country of origin. Another convenience of this maneuver is that product deriving from Georgia is applied with less taxation in bordering countries than from the European nations. A product initially is imported in Georgia and passes customs here, unless it is re-exported to its final destination in the region. Many international companies conduct their activity here following this formula.They have assembly lines or regional selling centers and distribute their product in the region from Georgia.

In addition, Georgia is being entered and exited by thousands of transiting road freights from nearly all of its borders every day. Many of them are coming or heading towards Central Asian countries, reaching their final destination using the most comfortable and shortest Georgian roads.

In conclusion, we can confidently assume that Georgia today represents one of the most important transit gates between Europe and Asia and contributes to global logistics a big deal.

Though, to maintain high ground and stable income from logistics, a constant rise is essential, meaning creation and implementation of hi-tech solutions in the sphere. Only this way, it will be possible to take advantage of the existing potential.

We have already discussed the road infrastructure of the country that is steadily developing and getting close to western standards. However, on crossing points of the main arterial routes mentioned by us, it is crucial to build and establish a full-scale warehousing infrastructure and global digital logistics centres.

For a broader image, let us look at various analytical channels, information sources or listen to experts in the field. From there, in regard to Georgia, we often use to hear the term: "Logistical Hub". Hub - as the main connecting point of global regional crossroads. Today, the main perspective of Georgia’s economic rise is orbiting around this concept.

Despite this fact, unfortunately, there are only  few full-fledged collecting-distributing centres in the whole country, where the product can be housed and managed safely during long periods. This is a huge lack for Georgia. For the fair name of a Eurasian logistical Hub, a sort of developing boom of terminals like that is fundamental. These would be places where a vast variety of products could be collected and kept in a safe and proper condition and distributed in various directions. Besides, these centres would also provide traffic flow management to freight forwarders.

Something like this, we can witness in the surroundings of Tserovani – a village near the city of Mtskheta. Many companies have their factories there. Why? – Because this village lies on the very crossing point of two major regional arterial routes. Exactly there a Vertical Corridor and East-West Central highway cross each other. However, in this case, we talk about medium-size plants, not global logistical bases.

On crossing points like these, it is important to place terminals and bases that will boost the efficiency of logistical processes. They would create thousands of new workplaces for our citizens as well, where people could get skilled in the field of logistics and improve their economic condition.

In this regard, there is a huge potential of developing an expediter-dispatchers direction as well. Alongside logistical hubs, the establishment of big-scale communication centres is easily possible, and that would also add a significant number to the new workforce.

We can name several conditional locations for the wide-scale regional logistics hubs: Let us begin with the eastern entrance of Tbilisi, from where one can easily reach an international airport, Tbilisi bypass motorway, and eastern border of the country. Another potential place is the surroundings of the lake KUMISI, which is an ideal place from where it is simple to reach Tbilisi and the borders of Azerbaijan and Armenia. The Village Tserovani, already mentioned by us, stands at a crossroad of two major arterial ways of cargo flow. The western city of Kutaisi, which is located in the midpoint of the country, has an international airport and by its position creates an ideal place for collecting-distributing terminals. And last but not least, seaports.

Unfortunately, today we have only few small terminals in the country, and none of them is Georgian.